Rocky the sheep on set. 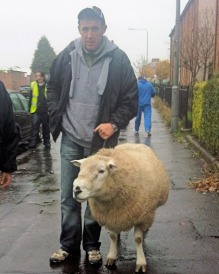 Rocky appeared in the first episode of the latest series of Rab C Nesbit. Keeping him happy on set, in the pouring rain, was easy, he loved the attention! Getting him loaded away from his adoring fans was quite another matter, born for the silver screen this one.
He was born into a Greek tragedy. A HUGE lamb, his poor mother died in birth, his twin squashed invitro, leaving the enormous Rocky to be hand reared. He now thinks of himself as maybe a dog, or a horse, probably human, he's not saying. Whoever he believes he is, the boy was completely at home on the streets of Govan.
Little 'Only' was playing the role of the 'lift' dog and appeared being pushed down the road on a bed. What a star. 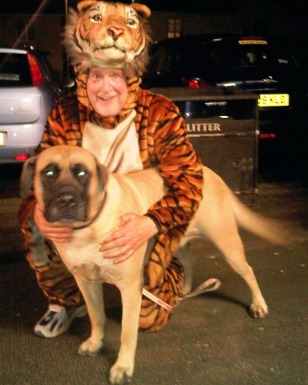 TONY ROPER RELAXING WITH REINA AFTER THEIR HYSTERICAL INTRODUCTION.  Watch the video, well worth it!